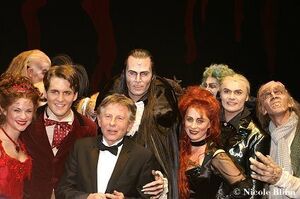 Tanz der Vampire is a German-language stage show with music by Jim Steinman (aka, that guy who wrote all of Meat Loaf's early stuff) and lyrics by Michael Kunze that premiered in Austria in 1998. It has since been performed in Germany, Estonia, Poland, Japan, and Hungary as well, with new productions planned for Belgium and Korea soon. (There was also a bastardized English production on Broadway, but THAT. DOESN'T. COUNT.) There is also an English fan album in the works, with lyrics to six songs contributed by none other than the 'Verse's own Megan, who also sings the role of Magda and has been busy writing a gigantic filkstravaganza version of the Watchsues plot set to the Tanz score.

It has given the Sueniverse, among others, Lucille-Ball-in-a-leather-corset Magda Snape, broody sitcom dad Graf von Krolock, and the latter's somewhat crazy but very pretty son Herbert von Krolock.

Alfred, a young scientist, is the assistant to a cranky professor on an expedition to Transylvania. The professor, a lively old man called Abronsius, has made it his life's work to prove the existence of vampires and to set mankind free. On the search for the castle of the vampire Count von Krolock, they got lost in deep snow in the wilderness. Half-frozen, they finally reach a lonely country village and stumble upon an inn.

There, the farmers and lumberjacks sing the praises of garlic (Knoblauch), which makes Professor Abronsius suspect that they have finally reached their destination but the village inhabitants deny that such a castle exists. In the room next door to the guestroom, to which the Jewish landlord Chagal shows the guests, is a bath in which Chagal's beautiful daughter Sarah is bathing. For Alfred, it is love at first sight. Sarah sees him as her ticket out of this asscrack of a village.

As Sarah's father, Chagal fears for his daughter's innocence. To be on the safe side, he boards up her bedroom door (Eine schöne Tochter ist ein Segen). While Sarah and Alfred dream separately of each other (Nie geseh'n), Chagal creeps through the dark inn to his maid, Magda, with whom he is trying to have an affair, in spite of Magda's disinterest. Rebecca, Chagal's resolute wife, notices that her husband has crept out of their bed. She arms herself with a salami and tries to take her revenge, but by mistake she knocks down the professor.

Finally, when everyone is asleep, a threatening shadow falls over the inn. Count von Krolock makes it clear that he has his eye on Sarah (Gott ist tot).

The next day, Professor Abronsius tries to find out what the landlord and landlady know about vampires. His investigation meets with silence. When a hunchback appears in order to get some candles, everyone becomes nervous and this makes Abronsius certain that the cripple acts as a servant for the vampire. He is determined to find out the truth. (Wahrheit).

A fierce flirtation develops between Alfred and Sarah. Sarah is against letting anyone else use the bathroom in which she passionately likes to bathe. Alfred observes her through the keyhole and witnesses Count von Krolock coming through a skylight and inviting Sarah to the annual midnight ball in his castle (Einladung zum Ball). Alfred raises the alarm so Abronsius and Chagal come quickly, but the vampire has vanished.

Later, Alfred sings an ardent song under Sarah's window (Draußen ist Freiheit). But Sarah had left her room a while ago in order to collect a present from the Count, which the hunchback has left in the snowy garden. When she discovers Alfred, he thinks she has come down because of him. She sends Alfred inside under a pretext and opens the present. Inside is a pair of red boots. Sarah puts them on and dreams about being the admired centre of the ball (Die Roten Stiefel), while Rebecca, Magda, and the rest of the village pray for guidance (Das Gebet).

Before Alfred returns, Sarah runs away. She wants to go to the castle. Alfred's cries wake Chagal in the house. He hurries after his daughter and leaves the desperate Rebecca behind.

The next day the lumberjacks bring the stiff, frozen corpse of Chagal into the inn. Professor Abronsius professionally establishes that the landlord may become a vampire. He suggests putting a stake through the dead heart so that Chagal does not become a member of the undead. Rebecca prevents this and chases the vampire researcher away.

In the night, Magda comes to the room in order to see Chagal and sees how thoroughly death has changed him (Tot su sein ist komisch). As she turns away, the body comes to life. Chagal seizes his maid and bites her throat. Then he lays the lifeless Magda under the cloth that had covered him. He has just enough time to hide under the table before Abronsius and Alfred return. They are about to drill through the heart under the cloth. At the last moment they notice what has happened. They find and overpower Chagal. He asks for a favour and suggests that he will lead the strangers to the castle, if they spare him.

They set off immediately. On the way, Chagal runs off, but Alfred and Professor Abronsius find the castle. They are just about to look at the splendid portal when Count von Krolock appears. He welcomes the strangers and invites them to be his guests and, to Alfred's dismay, Abronsius accepts. The Count's son, Herbert, also appears to greet them. He is very happy to have found a playmate in Alfred.

Von Krolock sees to it that he can speak to Alfred in private and tries to lure him away from Abronsius. He calls the professor an old fool who has no idea about the wishes and needs of a young man like Alfred. Instead, von Krolock offers himself as a paternal friend (Finale erster Akt). He hints that he can lead Alfred to Sarah.

Sarah wanders the castle halls, unable to sleep and meets the Count (Totale Finsternis). The vampire seizes the girl's throat and longs to bite her, but he resists, waiting for the ball which will be held the following night.

Alfred has a horrible nightmare (Carpe Noctem). He awakes and resolves to save Sarah. Before he can go to look for her, he has to accompany the professor to the castle's vaults. There they discover the catafalques of the Count and his sons. On the descent into the crypt, the professor gets caught on the banister and cannot free himself. Alfred, who is already downstairs, is told to open the coffins and drive stakes through the vampires' hearts. However, he proves to be completely unsuitable for this task.

Without having achieved anything, Alfred climbs the stairs again and frees the professor. Chagal emerges from a pine coffin, along with a thoroughly vampirized and sexually liberated Magda, who doesn't mind him nearly as much in her current state. They chat about the upcoming ball until Koukol pushes their coffin out of the crypt with them still inside.

Whilst searching for a better way into the crypt, Alfred and the professor come across the castle library. Abronsius sees the collection of books and forgets about the vampire hunt.

There, Alfred hears Sarah singing. He follows the sound of her voice and finds Sarah in a splendid bathroom in the castle. She sits in the bath enthusing about the Count's generosity and doesn't listen to Alfred's calls for her to flee with him. Eventually she expels Alfred from the bathroom because she wants to get dressed.

Alfred is desperate. Sarah is clearly a willing guest, not a captive. His love for Sarah, however, does not falter. On the contrary, he swears to do everything for her and to give everything to her (Für Sarah).

He returns to Abronsius in the library to ask his advice. The professor is still busy with the books and as he has not thought of anything better, he advises his assistant to bury his nose in a book as well. Alfred reaches into the shelf at random and begins to read "Advice For Lovers" (Wenn Liebe in Dir ist).

Contained in there is encouraging advice for him. And when he thinks he hears Sarah's voice again, he returns to the bathroom. Instead of Sarah, Herbert is waiting for him. Alfred tries in vain to get out of the way of the Count's son's advances.

While Herbert shows him how they will waltz at the ball, Alfred's glance falls on a mirror. There he sees only himself, although Herbert is standing next to him. When the vampire eventually gets hold of his Alfred and falls on him, Professor Abronsius surprises him by diving on Herbert and hitting him with an umbrella, leaving Herbert to pout and dress for the ball on his own.

Alfred and Abronsius climb the castle towers. Suddenly the vampire Count steps out. Once again he orders Alfred to separate himself from Abronsius and follow him (He, Ho, Professor- reprise). He then vanishes into the night.

Looking down on the cemetery from the castle's battlements, the professor and his assistant witness the graves opening. The undead of the past centuries push the gravestones aside and loosen their stiff limbs in order to march in a long procession to the midnight ball at the castle (Ewigkeit).

When the cemetery is empty, von Krolock appears. Lost in thought, he goes from grave to grave. He remembers the numerous sweethearts and other innocents he has killed as a vampire and becomes conscious of the misery of his existence. Every time he seizes happiness, he just destroys it. The more he tries to satisfy his greed, the greater it becomes (Die unstillbare Gier). He predicts, however, that soon humanity and mortals will be no better than he is.

The midnight ball begins in the castle's ballroom. Alfred and Abronsius have dressed as vampires and mixed with the guests. Eventually von Krolock appears and opens the party with the announcement that this year there will be a rich meal (Tanzsaal).

Then he presents Sarah. He dances with her and bites her throat (Reprise: Gott ist tot / Reprise: Totale Finsternis). During the next minuet Abronsius establishes that Sarah has withstood the blood loss and is still alive. The attempt to carry her off fails when the vampires recognise the two men as mortals because their images are reflected in the mirror. Von Krolock orders the vampires to give them to him. Alfred and Abronsius make a cross out of two candelabras. Horrified, the vampires retreat.

Alfred, Sarah and Abronsius flee through the winter landscape of Transylvania. When they have escaped to safety, they rest. While the professor busies himself with notes about the dangerous expedition for his scientific work, Alfred and Sarah sink into an embrace. But what seems like a happy ending is the beginning of a new world, for it turns out that Sarah was beyond saving. Now a vampire herself, she bites Alfred and turns him into a very confused undead being on the spot, and leaving Magda, Herbert and the others to invite the audience to join in their dance (Tanz der Vampire).

And, then, you know. Presumably, the 'Verse happened after that.

Megan's filkstravaganza version of the Watchsues plot, set to this. It needs a better title. Some of the songs have already been written: