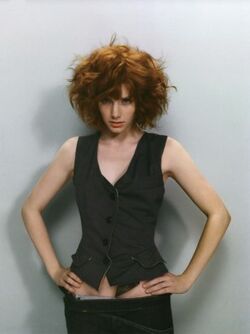 Rosalind is the heroine of William Shakespeare's As You Like It who, in trousers, under the sexually-ambiguous name of "Ganymede", flees from her cruel uncle's court to the forest of Arden. The play resolves this twisted tale quite happily; Rosalind marries her beloved Orlando, her cousin marries his older brother, and she prompts an unkind wench named Phebe to marry the shepherd Silvius who loves her.

One the Sueniverse, however, this history of events is quite a bit more convoluted.

Rosalind is played by Sarrin.

The Events of the Play[]

‎ Ganymede was not a separate personality originally; Rosalind, in fact, came up with him right off the top of her head as a disguise to prevent her maidenly modesty from suffering. He soon degenerated into a series of non-Rosalind-like tricks (or maybe evolved is the word?) that even her cousin Celia could not see the seriousness of. The largest of these was to charge Rosalind's love - who loved her madly - to visit him, pretending "he" was Rosalind, and woo the youth, under the pretense that Ganymede would this way cure Orlando of his love. Later, Rosalind made it plain to Orlando who she really was, and they had plans to marry. But they broke them off shortly after, the young lovers confused. Orlando wasn't sure of the nature of his attraction to the boy who - even while resembling his Rosalind - had still been a boy in his mind, and she - well, she wasn't sure of anything.

Rosalind's first Parisian acquaintance was an Irish lass named Alex who sometimes seemed to be an Irish lad (also named Alex). The sight of another red-haired could-it-be-female in trousers coming towards her on the street had been uncanny and serendipitous. Obviously, they became fast friends. Alex's own love of trouser-wearing, freedom, and ladies is in some ways new to Rosalind, but is in others just what the girl needs to hear. Although Alexacknowledges that Rosalind's perception of gender and herself is very different from her own, she understands her friend - and supports her - much better than does their mutual friend Mercutio (with whom they form the DREAD RED-HEADED TRIO).

In spite of this - or perhaps because of it - Rosalind's desire to please Mercutio is greater than her need to please Alex. Or maybe Rosalind has a thing for undependable redheads. Or maybe Shakespearean wits flock together. Or maybe Mercutio has not got a very responsible sex drive, Rosalind is curious, and Alex has a steady girlfriend. Or something. In any case, Sarrin and Maggie have PLANS, oh boy do they ever.

Rosalind's father, the Duke, having regained support and usurped his usurping brother, will soon be coming to Paris, giving his daughter a place to stay and a double life to go with it - Ganymede reigns in the taverns and the streets, learning how to brawl and drink from his Judas-haired companions, while Lady Rosalind flirts only from behind a fan in the French court. And he is followed shortly by Lady Celia, whose close friendship with Rosalind only forces Rosalind to be even more careful and dishonest. The ensuing confusion causes by living as two different people does not seem as though it will get more serious than in costing Ganymede such small victories as the attempted conquest of the handsome Englishman George Boleyn (whose seduction is foiled by his inopportune meeting of the fine Lady Rosalind in a dress at a party).

Then again, Rosalind doesn't know her father intends to find her a husband.

Although Rosalind is played by the green-eyed beauty Bryce Dallas Howard, she has blue eyes. Other than they are a perfect match, in looks and manners both (although Ganymede is far more ambiguous and less dainty, and appropriates some Mercutioisms at first). Her hair is rather magical, as it is whatever length her suethor desires it. This means that Ganymede can have hair to his shoulders or quite short, but that Rosalind can have shoulder-length hair or longer the next day without anyone noticing a discrepancy. What can I say? Bryce Dallas Howard takes a lot of pretty pictures. When in doubt, readers, imagine it as a bob.

Rosalind's costume, as well as her way of moving, changes with personality. As a lady, dresses, long hair, and all femininity are the fashion; her clothes will almost always be very courtly and upper-class. Ganymede's the wild card. Usually in streetwear, he is not entirely adverse to formal dress if he is crashing a party in his female counterpart's place.