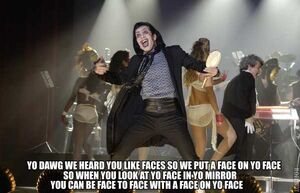 Pavi Largo, originally from Repo! The Genetic Opera (where he was played by Skinny Puppy frontman Ogre), is a character on the Sueniverse. His Suethor is Megan, who underwent the terrifying process of being proposed to a number of times by the "official" RP version of the character at MySpace.com. He is the younger son of GeneCo CEO Rotti Largo, the younger brother of Luigi Largo, and the elder brother of Amber Sweet. He is generally considered even scarier than Old Gregg, which says a lot, but seriously- Old Gregg may have a mangina, but he doesn't go around raping girls and then wearing their faces stapled over his own twisted visage.