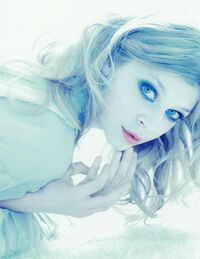 A personification of Paris, Notre Dame lives somewhere beneath the cathedral in a chamber of water and pale marble. This chamber is impossible to find unless one's been there before, or unless they have a guide who has. Notre Dame rarely leaves- or at least, outside of it she is rarely seen.

Notre Dame is very pale, wears a ragged dress of lace and silk, and her eye color changes as she decides it should. She is very, very, very attracted to shiny things.

So far, she has met Cendrillon Rien, Valmont, and Miranda; the latter of which now works for the second because of her, and goes to the cathedral often to pray. She is visited often by the Marquis de Carabas, who is often entreated to be a guide for those who seek her. For a favor, of course. She is great friends with the kitteh.

Notre Dame is loosely based on the angel Islington from Neil Gaiman's Neverwhere, as she is to Paris what Islington was to, well, the Islington in London. Except she is much, much less psychopathic.

Her pb is Clemence Poesy, and her suethor is Maggie. Megan came up with the concept, but Maggie deserves the credit for making the character what she is.