Nicolas de Lenfent is a vampire from the Anne Rice novel The Vampire Lestat, played by Sarrin. Originally meant to antagonize Maggie's Armand, he has since become her most-frequently-played character and has usually several threads going on at once.

His name is pronounced as though it were French, because it is. That is to say - no 's'.

Within the novel, Nicolas de Lenfent is a more-or-less minor character, a rather ambiguous friend of Lestat's (not finally called his lover until Tale of the Body Thief, and only once), a young and cynical 18th century violinist who is kidnapped by the coven of Les Innocents to lure Lestat and Gabrielle to them, and turned into a vampire by Lestat shortly after being rescued. Quite mad, and very hostile towards Lestat, he founds the Theatre des Vampires and remains there several years, behavior reckless at best. At one point his violin-playing is so manic that Armand, the unofficial leader of this drama troupe, removes his hands and imprisons him in Lestat's Tower for several days without blood. Upon having his hands returned to him, Nicolas writes a stack of new plays for the theater and demands a funeral pyre.

'VerseNicolas has a considerably expanded history, and Sarrin and Maggie have since decided the boundaries of his and Armand's relationship. At first they believed they'd be hostile towards each other, but since then they have learned the relationship is not so simple.

Nicolas blames the vampire Armand for his continued existence, and faults him for not having scattered his ashes, but in truth is not certain how he came to still be alive. He and Armand have a tense but occasionally intimate relationship. After a comment from Armand that Nicolas found particularly cutting, Nicolas attempted to draw his attention in a string of lurid and highly-publicized murders. Armand invited Nicolas to live with him in Lestat's Tower afterwards, so as to prevent him from doing any such thing again.

Nicolas, however, remained unaware that Vincent Chevalier was currently also staying in the tower and when he discovered this it was fantastic. Not for him, though. After going to the tower and having a long, intimate conversation with the older vampire, Vincent interrupted them, and this was made very clear. Deeply humiliated, Nicolas fled. He has not seen Armand since.

Nicolas is rather fixated on Armand. It has been duly noticed by his other acquaintances. He has been never unable to cease focusing on the fact of Armand's having kidnapped him. When not breaking his fingers or calling him Nicki, Armand is amused/annoyed by this and refers to it to himself as Stockholm Syndrome. It goes far beyond that, however. The greatest tragedy in their relationship is Nicolas' unshakable love for Armand (mixed with considerable personal disliking for him) and Armand's calm and composed inability to return it, or care.

They have a theme song, which is 'In Your Room' by Depeche Mode, based upon their time in the tower, reflecting Nicolas' little obsession with Armand and that particular time in his life rather nicely with the lyrics:

Cause flames to arise

Will you let the fire die down soon,

Or will I always be here?

Shortly after meeting Armand, Nicolas met Aurel, through breaking into his chateau, and was staying with him a short while. Although their meetings have been short and brisk - often involving a good deal of hostility - when Nicolas came to him and informed him that he would be staying with Armand from then on in, a curt conversation about intimacy and love began that ultimately ended with them having sex on the floor of Aurel's library. This instigated some c-box gossip at the time, as Nicolas was simultaneously flirting madly with Aurel's half-vampire daughter, Lune Ciel, not knowing that the two are related.

This moment has a theme song, which is 'Take Me On The Floor' by the Veronicas, because I said so.

He has not seen Aurel since his discovery of Vincent Chevalier at Armand's tower, because he knows Aurel made Vincent and is looking for him.

Lune Ciel is a beautiful half-vampire Nicolas met after his first brutal murder. Although they hardly know each other, around each other they act like starry-eyed high school students, only they exchange blood instead of phone numbers. Nicolas has no idea that he has just slept with her father.

This couple also has a theme song, which is 'Angry Angel' by Imogen Heap.

Lestat, Nicolas' infamous maker, is also on the Sueniverse, although he is considerably different from the Lestat Nicolas remembers. Which did not stop them from breaking into some poor mortal's flat and having very vampiric sex - after which Lestat, being a dick, got up and left without a word. The thought that he cannot go to Lestat - or Armand, or Aurel - could have prompted further insanity, but Nicolas decided he would attempt solitude and independence. Which leads us to...

George Boleyn was met by chance at a morbidly-named tavern. Banter ensued, and Nicolas has already become hopelessly besotted with the mortal. George - whose lover was recently executed - has no incentive to embark on a serious relationship, and to his mind, this shall be nothing more than a fling.

A fling. Yes. You've read the above Armand section and know why this is amusing, yes? But George does not know this.

Maggie and Sarrin have several threads going on, including Facebook and Myspace ones, in which Armand and Nicolas interact in the 21st century.

While leaving behind a string of murders to gain Armand's attention, Nicolas met a vampire the size of a large doll, the beautiful and cold Claudia. Nicolas' failure to treat her like a child and quickness to abuse Lestat ensured that this was an interaction bound for success. However, something unsettling grew out of all of this, a theory Nicolas has for what this version of Paris is: an afterlife, a strange and haunting Purgatory one ends up in after one's death, for Nicolas' suicide has apparently failed, and Claudia, murdered by Nicolas' own Armand, is also back.

Armand found this theory pitiful and told Nicolas so, but Nicolas' belief in it has yet to be shaken.

Nicolas' icon is of French actor Damien Sargue, for the simple reason of his being the Romeo in the French version of the musical Maggie got Sarrin completely obsessed with, which makes this extremely amusing.

Nicolas is tall for the 18th century, with very long and very curly - and very messy - chestnut-colored hair, tied back in a queue as was the fashion in his day. He is rather slim and youthful in appearance, having been about 20 at his death. Although he was once rather fastidious in appearance, he can't comprehend 19th century fashion and generally sports ill-fitting and dusty clothes. His hair, too, is more than usually dusty, although as an Anne Rice vampire it looks like a doll's hair gathering dust rather than how a mortal would look under similar circumstances.

Injokes and Phrases of Importance[]

This is an OOC remark of Maggie and Sarrin that has been repeated multiple times and shall never die.

Nicolas frequently compares Armand to a choirboy (a reference to the remark "Liar, with the fact of a choirboy" that Lestat makes of Armand in The Vampire Lestat).

Armand's mentioning Lestat is rarely a good idea, although Armand is a bitch and likes to do it anyway.

If anyone ever reads a thing about Nicolas, Lestat, and a hayloft, may they just know that is another injoke. 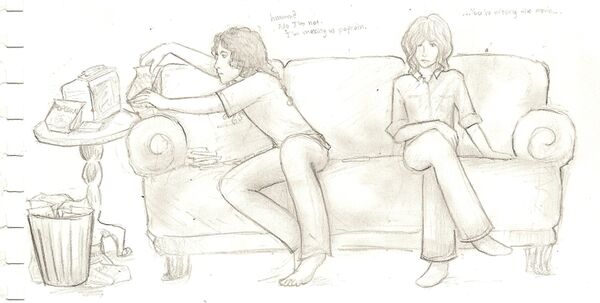 Night Island shall doubtless spawn countless injokes, especially as Maggie has already illustrated two of the to-be ones, including:

Likewise hilarity has ensued as Armand has introduced Nicolas to a clothing store, and they have bashed Lestat's books repeatedly. This will become a hobby.

They have yet to visit the Budapest theater and steal clothes from the performances or to visit a supermarket and hook Nicolas on winning prizes from those claw machines.

Regular Verseplot has yielded its own hilarity, too, as Nicolas shall soon present Armand with the rings he's stolen for him, and eventually shall became fixated on flowers, which is also a song, 'Flowers', by Emilie Simon:

I want to buy you flowers

And now I'm standing in the shop

I must confess, I wonder