Mercutio is a smooth-talking and somewhat flamboyant character currently running wild in 'verse Paris. Maggie's most-played character after (or tying with) Armand, he is taken from Shakespeare's Roemo and Juliet but based almost entirely on Bereczki Zoltan's version of him in the Hungarian musical Romeo et Juliette. He, Tybalt, Meg Giry, and Rosalind are currently involved in the Plot of Doom and Shakespearean Tragedy. 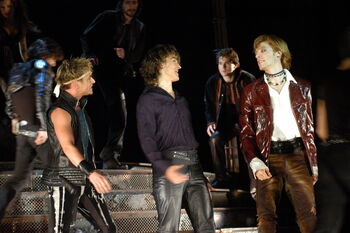 Mercutio has short red hair and blue eyes. They occasionally are described as gray, not because his eyes actually change colors but because Maggie is easily confused. Tall and gangly, he has a strange sort of exaggerated grace to his rapid and wide-reaching movements. He makes grandiose gesticulations and rude gestures, and his most common facial expression is a grin. He likes to wear the color red.

His pb is Bereczki Zoltán.

Second cousin to the Prince, Mercutio got away from his family and out into the streets, pubs, and barmaid's beds of Verona as soon as he possibly could. Granted, puberty was a given before that last one, but much of his late childhood and the rest of his teens were spent with Romeo, Benvolio, and the rest of the - largely Montague - gang. Although he thinks the feud itself is a rather stupid idea, he's enamored of street brawling and fist fights, and the Capulets make such good targets. His very favorite is, of course, the Prince of Cats himself- Tybalt.

He has two older brothers, an older sister, a younger sister, and two very small half-sisters. Valentine, the son just above him, is the only one of the older siblings he can really stand; his younger sister is mid-teens, just about marrying age, and very much like Mercutio, to his delight and his family's despair. The four oldest children's mother is dead; they have an extremely young stepmother whom Mercutio patronizes enormously when forced into contact with her.

Unsurprisingly, Mercutio gets along very, very well in the world of the 'verse. Currently he's working at the Opera house as a stagehand, but only when there's someone official (or really, really hot, and likely to be impressed) looking.

The most delightfully trousered maid Mercutio has ever met, Alex is his equal in debauchery and intent, and there are often more sexual undertones in their back-and-forth bantering than Mercutio employs with the much more innocent Rosalind. She is one of the Dread Red-Headed Trio. 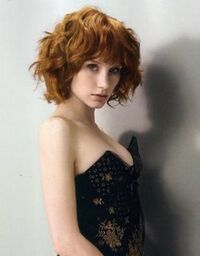 Rosalind had the great misfortune to be dressed as a boy when Mercutio met her, unlike Alex. Although she saved Mercutio from a street vendor's wrath, sparking much light-hearted, playful sort of jesting, he knew her at first as Ganymede, and was most sullen when their first mutual meeting with Alex reveals that she's tricked him. Rosalind is very fresh-faced and enthusiastic, although untested in the arenas of sex and alcohol and such. She makes up the third part of the Dread Red-Headed Trio.

There are Plans for the two of them. As Tybalt has Meg, Mercutio has Rosalind- he just doesn't know this yet.

Mercutio's next oldest brother from Verona, and the only one of his older siblings he can stand. Valentine tends to be very fussy and very un-Mercutio-like in both order and intent, and Mercutio quite enjoys ribbing him; although their relationship is more strained now, with Valentine feeling extremely like the put-upon older brother trying to convince his younger one to straighten up, they were very close when they were children and Valentine is the only of his full siblings that Mercutio is certain misses their mother. Not that Mercutio cares, but it does lend him a certain sympathy to Valentine and an affection that does not extend to Mercutio's other older brother and sister.

Much to his dissatisfaction, Tybalt's newest squeeze seems quite immune to Mercutio's charms. He is determined, though. He has absolutely got to annoy Tybalt in all ways possible; befriending Meg seems like a good way to do that. Mercutio doesn't actually think Meg is that bad, as far as maidens go, but he is certainly not prone to idolizing her as Tybalt seems to do.

However. Mercutio does not approve of this habit of his closest friends and enemies to fall in love left and right.

Ghislain and Mercutio's first meeting was not such a success; however, Maggie and Sarrin remain hopeful.

Mercutio approves quite mightily of Valmont. It is anyone's guess as to why they haven't had sex yet; after all, Valmont let Mercutio borrow his wig, and Mercutio has yet to pay him back a favor.

Mercutio met Lavinia only briefly, and not at a time either would probably consider their best; zombie infestations tend to do that to people. Neither liked the other very much; Mercutio found her lack of hands and moaning to be highly unsettling, and Lavinia harbors an intense dislike for him because his flippant, callous comments remind her of her boyish, long-ago rapists.

At one point, Mercutio was determined to charm Andrew, based on a flimsy but insistent fascination with a man who could instill so much ice in so few syllables. This fascination very shortly turned into a sullen sort of spite as Andrew threatened to call the cops on Mercutio, a move which would dampen any romantic endeavor. This plot is rather unfortunately not likely to go anywhere now, as Andrew was killed recently by a highwayman.

Marquis de Carabas and the kitteh[]

Although Mercutio and the Marquis also met under unfortunate circumstance (Mercutio was rather naked and under the kitteh's influence at the time), Mercutio later met the Marquis again and found him a jolly if mysterious sort of chap.

However. Mercutio is likely to run screaming before he ever, ever, ever touches a cat again.

Substituting for a waiter of the nobs in the box seats one night at the opera, Mercutio started a conversation with Scarlett based on their mutual dislike of Andrew. He gave the Mercutio version of a pep talk but rounded it out very nicely with lots of disrupting the opera and sarcasm to make himself feel better about having done so. The fact that Scarlet is really, really, really hot... helped.

Maggie plans on bother Kris about the two of them again sometime quite soon.