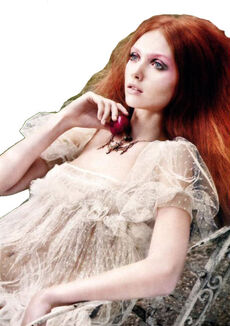 Countess Carmilla ('Mircalla, Millarca) Karnstein is a Sarrin-character loosely based off Carmilla by Sheridan le Fanu.

Carmilla was nothing more than a bored young Austrian countess - who was bound to become nothing but a bored old Austrian countess by the end of her life - until one very fateful winter a beautiful young Russian woman swept into her husband's castle. Of course her unfaithful husband lusted for her, but this woman had eyes only for Carmilla, whose little sexual awakening was very nice up until her husband discovered it. Carmilla's lover was a vampire, however, made sweet Carmilla for to be her mate, and killed Karnstein in a way that made it look like a tragic accident. Carmilla has since then learned that love does not last forever, though, as a couple decades of quarreling can certainly damage a romance. She and her Russian lady split, and Carmilla is now, as she always was, really, looking for love in all the wrong places.

Carmilla was about 16 or 17 when made into a vampire and has long auburn-orange hair, a pouty mouth, and a pale skin. She is flirtatious and vain, although good-natured, about her looks. She is more often than not very fashionable. Her avatar changes occasionally, but it might permanently remain Natalya Piro.

Carmilla is not confined to the darkness, although sunlight hurts her eyes very, very badly and makes her terribly cranky and temperamental. She can eat and drink, but generally prefers not to, and will only eat a little at a time, for the sake of appearances; food seems tasteless to her. Drink is a little better. Carmilla is fabulously fond of becoming at least a little drunk. She more often than not sleeps in a coffin in a cemetery, but can sleep in a bed in hotel without much persuasion. She is not overly strong or fast by the standards of some vampires, but for a young woman of her size she certainly appears to be.