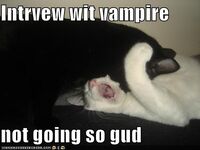 Ah, Anne Rice, she of the ego large enough to placate her penis envy.

Her Vampire Chronicles have brought the Sueniverse much joy (and some flinching), particularly in the forms of rapetastic-but-hot Daniel Molloy, pederast-inviting Armand, and spectacularly emo Louis de Pointe du Lac.

Anne Rice vampires typically drain victims of nearly all their blood, thus killing them, although they can take a "little drink" and leave the mortal be. Depending upon their age, they are usually powerful, with the ability to move very quickly and great strength; most of them can read the thoughts of others, although they cannot read the minds of those who have made them nor of those they've made. There's lots of ridiculousness involved, too, but the most significant thing anyone needs to know is that they can't actually have sex in the books. Following the standards of Daniel Molloy, though, on the 'Verse they apparently can. And do. Most of them.