Formally known as Alexandros III Philippou Makedonon (Alexander III, son of Phillip of Macedon), Alexander on the verse is quite different from the historical figure. He started out as accurate as possible, but through encounters with Darren, Susanna, and Nadir, he slowly developed into a verse version of himself. 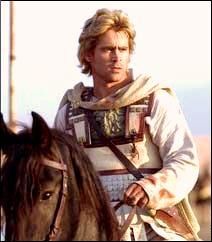 Widely described by many historians as both short, and, of all things, blonde, Alexander's physical appearance is still debated about to this day. In the verse, Alexander is portrayed by Colin Farrell, simply because it was convenient to his Suethor.

At 5'3, with silver eyes and a roguish haircut, Alexander has been careful about avoiding the mullet, as it has gotten him into trouble before. He has been referred to as both "golden" and a "prizefighter", both of which amuse him.

Alexander is gentle and fierce. He often appears brusque and cold, but is loving and tender towards his kori (sister), Susanna. He loves Nadir desperately, but is often formal and solemn around strangers. He speaks bluntly, and this bluntness led to some confusion with Susanna in the beginning, and later, with Nadir.

Alexander encountered Darren while he was talking to Bonnie-Marie and Ichabod Crane, looking for Hephaestion. Darren invited him to his home for dinner, and while there, Alexander first met Nadir, through a rather embarrassing set of circumstances. The three men had a brief one night stand (involving a ceiling fan), but it marked the beginning of Alexander's relationship with Nadir.

Later, while moving into his palace, Alexander met Susanna. The two began a confusing and often seemingly incestous relationship that went from being a one night stand to a familial understanding. Nadir, who met Susanna after the ceiling fan incident, fell in love with her, and questioned Alexander intensely regarding his feelings. The two men never considered each other enemies, and indeed, the whole affair was a strange love triangle, as Susanna loved Alexander, who loved Nadir, who loved Susanna. Later, Susanna married Raoul de Chagny, unknowingly as his fourth wife. When Raoul attempted rape in lieu of his marital night, Alexander and Nadir stopped him, with Nadir giving him a warning. Much to his shock, Raoul confessed to love Nadir, and later kidnapped him. Eventually, Nadir was returned to Alexander's estate, where he had been staying.

During this time, Susanna announced her pregnancy, but whether it was Nadir's or Alexander's remains unknown. (Actually, it's biologically IMPOSSIBLE for it to be Nadir's baby. -Ed.) Both men believed it was the other's, and it caused considerable anguish between the two, who had formed a close and permanent bond. Further upsetting their relationship was the arrival of Hephaestion, Alexander's historical childhood friend and often thought lover. Hephaestion's arrival and Nadir's subsequent kidnapping made Nadir profess his love for Alexander, and Hephaestion departed.

Alexander then disappeared for some time, first conquering Spain, and later, England (although he mysteriously managed to avoid upsetting the delicate time/space balance affected by Percy Blakeney and his family).

He has recently returned to France, to find that Nadir's sister Mitra has arrived, Nadir is married in name to Emily, and that Nadir's daughter Shadi has grown up completely and is under the misguiding influence of Rochester. He is unaware that Ghenghis Khan is close by, or that Nadir has a son, Sinclair.

Adrian Veidt has no idea Xandros is on the 'Verse, which is probably a good thing.