Adrien Baillon, sometimes known as Notre-Dame des Fleurs, is loosely based off the Jean Genet novel of that name. He is a rentboy who had the only-on-the-Sueniverse luck to succeed in sneaking into Veidt Industries for Adrian Veidt's ward Micaela's 18th birthday party, where he was hit on by said smartest man on the planet and whisked away to a bedroom where Bubastis watched Megan and I slash them. It was glorious.

Adrien's PB is Jeremy Dufour. He wears more than underwear in most of his pictures, but I doubt you care.

He has nothing to do with Adrienne Bailon. Stop asking.

1/2 of Mass Murderers and the Rentboys Who Love Them. Guess which one he is.

Adrien's mother, Lucie Baillon (because being named Lucy or any variant thereof is a bad, bad sign in any melodrama), was 14 when he was conceived, and being a wretchedly naive lower-middle-class Catholic girl, she was immediately thrown out by her parents. A string of boyfriends ended up being the male presence in young Adrien's life. I wish I could say none of them were abusive, the one she had when he was 12 in particular, but unfortunately that just wouldn't be true. Or melodramatic. She got a new, better boyfriend a year later, and they married, and that was the end of that problem. Being neglected was a lot better than being paid special attention.

When Adrien was 14, attending college at a small Catholic school, he got a crush on a young priest, André Wozniak, who had just begun teaching classical history there. Some shy requests for after-school tutoring on Adrien's part were all that was necessary to pave the way for a relationship, which at first rekindled the naturally-bright young man's interest in school. By the following year, however, his elation had turned into dread and natural, painful discomfort with the uneven affair. Unable to keep up, he got out of school as soon as he could, his sixteenth birthday.

Living on the streets being much harder than he could have ever imagined, he understood finally how his mother could put up with such a lot of human garbage. He got used to being garbage himself, even committing pre-meditated murder for the petty reason of getting money. The guilt generated by that act shocked and shamed him into milder things, like simple theft and prostitution. Unlike hanging with cold criminals, there was something almost sweet and decent about the transvestites and queens he took to, who christened him "Notre-Dame des Fleurs". One of his numerous lovers (although one of his few friends), a pimp called Darling, took him to the famousest of the rue Pigalle queens, a sweetheart named Divine, and he lived with them for a while until Divine, playing match-maker out of a secret resentment over his trysting with her man, introduced him to Roger Marchetti. 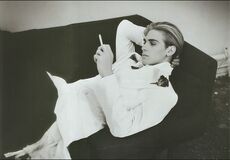 Adrien fell wholly and totally in love with Marchetti, a handsome blond Corsican who knew Greco-Roman wrestling, was quite a bit older than the boy, and happened to be head of a huge coke trade. Adrien, although not a cocaine addict (which Marchetti, thankfully, never tried to remedy), was happy to follow Marchetti along even through twisted and harrowing situations, up until Marchetti decided to ditch the kid (he even considered turning him in, or having him killed, but either thought better of it or didn't think it was worth the effort). He struck him on the side of the temple - his gold signet ring leaving a scar that Adrien will show you if you hear the story, rather proudly - and knocked him out, and vanished.

Ironically, doing this probably saved Adrien from prison, as Marchetti's group was arrested a couple of weeks later. As the search for him had been, the arrest and resultant trial were highly publicized. Marchetti got a life sentence. Weary - he was now 19, and had been through a lot - with his smile damaged but still there, Adrien made his way back to Montmartre and Divine's rooms, where he stayed with her and her new boyfriend, Seck Gorgui. It was here that Adrien developed his interest in Adrian Veidt, a man who used to bust drug rings rather than run them (although he - purely coincidentally - shares Marchetti's - and Darling's - relative age, blond hair, emotional coldness, and flashy personal style).

Adrien is a charmingly shabby, always-smiling, compellingly beautiful 19-year-old with a laid-back, easy-going personality - perhaps too easy-going, admittedly. He does not think very highly of himself, but it would take a keen eye to figure this out, as he does not air his views or mope. He seems content with his quaint little life and his lot in it. When caught in something - he says he can't, or doesn't, read, but can and does, frequently, in secret - his behavior is different enough as to make it plain that there is more there than meets the eye. He gets silent, even sulky, and his smile vanishes as though it was never there, and he more often than not tries to leave the room. He opens up without a lot of prodding, but there has to be prodding. He does not share himself with people he thinks are uninterested, and he assumes they all are. Sadly, in fairness to him, they always have been.

Adrien was one of those characters you really want to play but don't know what the hell to do with, and besides I really needed to reread his book when I first started playing him. Trying to stay true to the style of the book - where he is always referred to as "Our Lady of the Flowers", up until his trial - it took me a while before I gave in to my desire to type "Adrien" instead of "Notre-Dame".

When Adrien first showed up on the Sueniverse, it was plain he had no direction or ambition and was flatly suppressing quite a bit of bitterness about his life, although doing it all with a smile. He pursued Erin Harper for a few threads, but to no avail (Erin was really not into him, and any chances of suethor match-making were nixed when Maggie and I became enamoured with the idea of Erin and Malika).

Then came Megan's decision to have Adrian Veidt have sex on the Sueniverse, and on the basis of his non-Our Lady name ("nametwins NAMETWINS"), Megan went with Adrien. Plotting ensued. And then, as is natural and expected, so did threads.

Adrien, who had steadily avoided newspapers after his crime, was coaxed back into reading them by his roommate Divine on the basis of a joke, that one newspaper had an article about him. Momentarily terrified, Adrien was relieved to see it was just someone with a similar name and slightly similar appearance, Adrian Veidt. He took to reading again and became ultimately interested enough in the man to crash his ward Micaela's 18th birthday party.

Veidt recognized him as an outsider immediately, but he was beautiful enough to catch the man's eye, and was, in a conversation half-cold and half-complimentary, invited behind the scenes. After they finished having sex, Veidt paid him in cash several times the amount that had been agreed on, rather humiliating for Adrien, who had a serious aversion to money in large amounts anyway, due to the fact that he'd once killed a man for it. Adrien's refusal to take it made Veidt momentarily lose his temper and frighten him. Veidt relented, and hired him - without even requesting an interview - to be Micaela's personal assistant (with the curious statement, "I suppose you can think of me as your guardian angel"). Although the relationship is wholly legitimate to Veidt's mind, and Veidt does see himself as saving Adrien from an impoverished existence, to Adrien nothing has changed but the man keeping him. Of course, to his mind it's a rather nice change, so he doesn't mind it.

Veidt's impression of Adrien as a low-class, cheap prostitute isn't off, but his life is hardly as mean as Veidt thinks. Adrien lives with Divine and Seck in a couple of rather nice, if shabby, rooms on the top floor of an apartment building in Montmartre. The windows overlook a beautiful, flowering cemetery. It is, in Adrien's words, something of a halfway-house for all the stray cats in the city, and though he doesn't give them names - everything in his life is temporary and he avoids attachments - he thinks of them as his, not Divine's or anyone else's. One of them has a habit of giving birth to litters of kittens in one of the kitchenette's cupboards. He likes this.

Although he is being paid a rather exorbitant amount of money by Veidt, he donates most of it to charities or to nearby programs, like the library; he can't stand the thought of it being his. He knows where all the markets and bakeries in the area throw out the day's extra produce and has less of a need for money than one would think. Against his will, however, his life is going to get a lot more secure, as soon Seck will be going back to a queen named Banjo, and Divine will be - against - arrested for possession of marijuana, and Adrien will be the only occupant of rooms that will kind of start to be his own.